GROWING OF ZAFFERANO: THE INSPIRATION

Since its founding, Zaffineria has respected all biological parameters of the production cycle of the soil. In fact, our identity is born from an ethic for life imprinted in full respect of ethnic uniqueness of all living organisms. Through this project, it was possible to bring out a territorial individuality recuperated with a careful and specific study. From the first historical evidence of saffron, and backward along the upstream of memories, narratives, ancient techniques and practices, our research allowed the rise of a knowledge based on the relationship between man/spice/territory that not only explains how to use something, but, and most importantly, reveals how to give a deeper meaning to the dynamic and functional link between the human being and the environment. Thanks to an amalgam of external influences, typical of the zones that cross the Abruzzese Apennines, the territory itself enables a recognition of differences welcoming, transforming them and making us part of this development among those who identify with these life aspirations. Our professional implications are part of the soil and crocus (Crocus Sativus) process, which also implies the use of mental, historical, cultural and cultivation humus on which grafting the idea of an authentic saffron cultivation: manual, traditional, classical and exemplary. Extentending this idea would bring us to conceive and to implement a relationship Man-Nature in continuous dialogue. This relationship is capable of creating great work, enclosed in the simplicity of small gestures that match the natural life, fundamental part of our human instinct. A return to nature as a gift found through the ceiling dust of our memories, even before our memory, embedded in everyone and everything’s memory.

AGRICULTURAL TECHNIQUES AND CREATIVITY OF THE INVENTION

Zaffineria runs an annual organic cycle culture, based on the ground’s possibility to reintegrate into its habitat, by leaving it to rest for about 8 years before replanting a new saffron cycle on the soil. The organic cycle culture allows to obtain small amounts of extra-fine spice, which is esteem because of it natural reproduction and because of its tuning with territory context and seasonal climate. In our special cultivation of saffron we also apply, conceptual, technical and theoretical approaches from multiple biological disciplines. The strands that mostly contributed to the creation of a sophisticated, spontaneous and authentic saffron cultivation are: Steiner’s and his conceptual lines of biological cycles; some synergistic agriculture aspects of Hazelip’s approaches adaptable to our territory. A bond among territories, customs, climates and atmospheres, knowledge and techniques, in our case agricultural techniques, that are typically “abruzzesi”, and which will never forget the origin of this particular spice in lands and far more distant, ancient and different past that so well conjugated with us. All this thanks to saffron’s evolutionary history rooted in our region since the year 1200, causing the plant to become one of Abruzzo’s preciousness and giving rise to the finest saffron’s quality in the world.

The Oak, the Almond and the Olive trees are the monumental, highly symbolic for their specific properties, jeweled of the Abruzzo landscape, are representing a further fundamental principle linked to saffron production style in our area. Zaffineria adopted this principle, naturalizing it, in particular the processing and drying, so atavistic and ancestral, intuitive and calibrated at the same time. Historically, it was used oak, almond and olive trees to form a more delicate aromatic embers on which was placed an upside down sieve. Then, the pistils, extracted with lightness, speed and accuracy between the violet petals, are laid in bunches to dry. This process is reproduced annually in our kitchens, powered by a timeless, legendary and rational story. 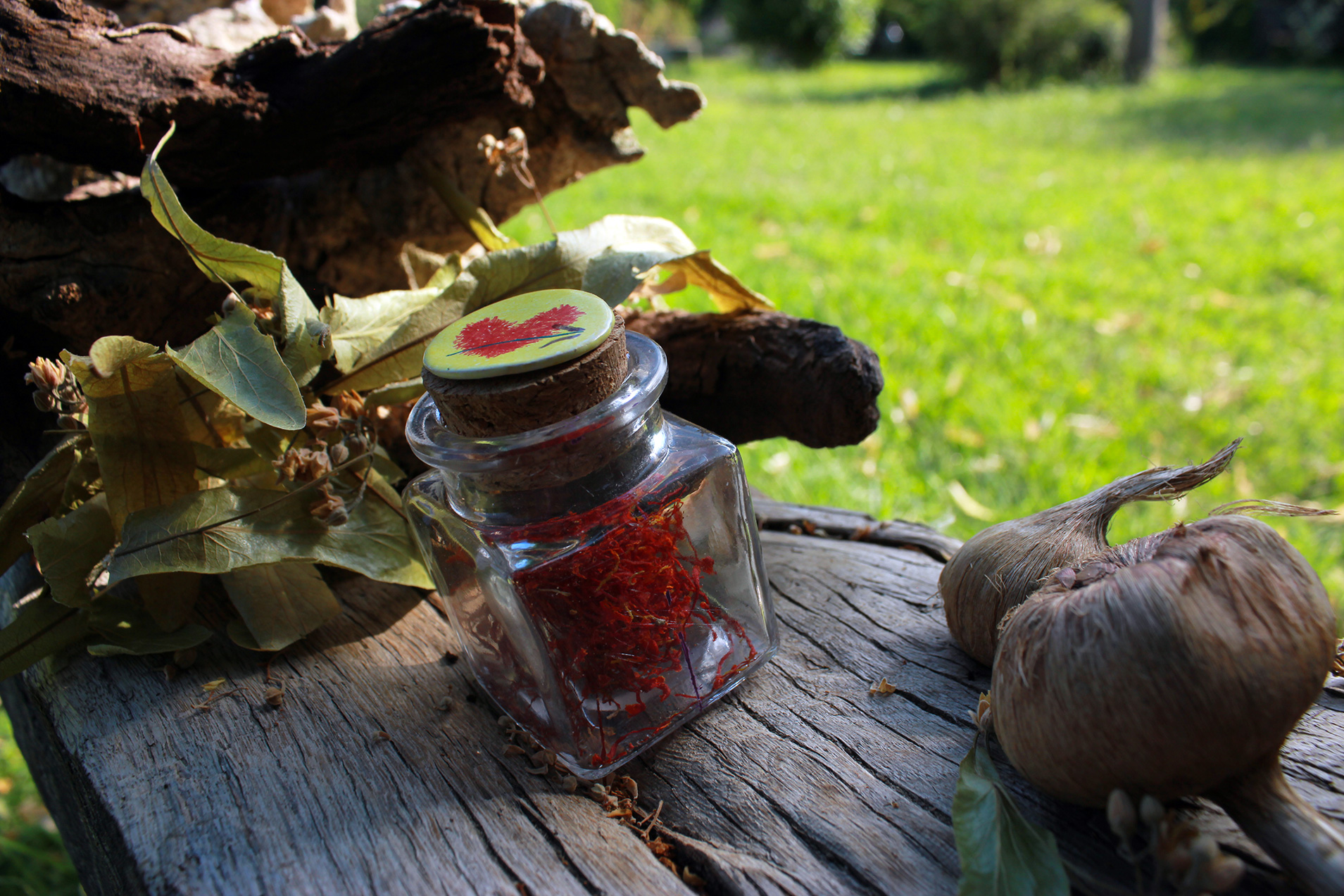